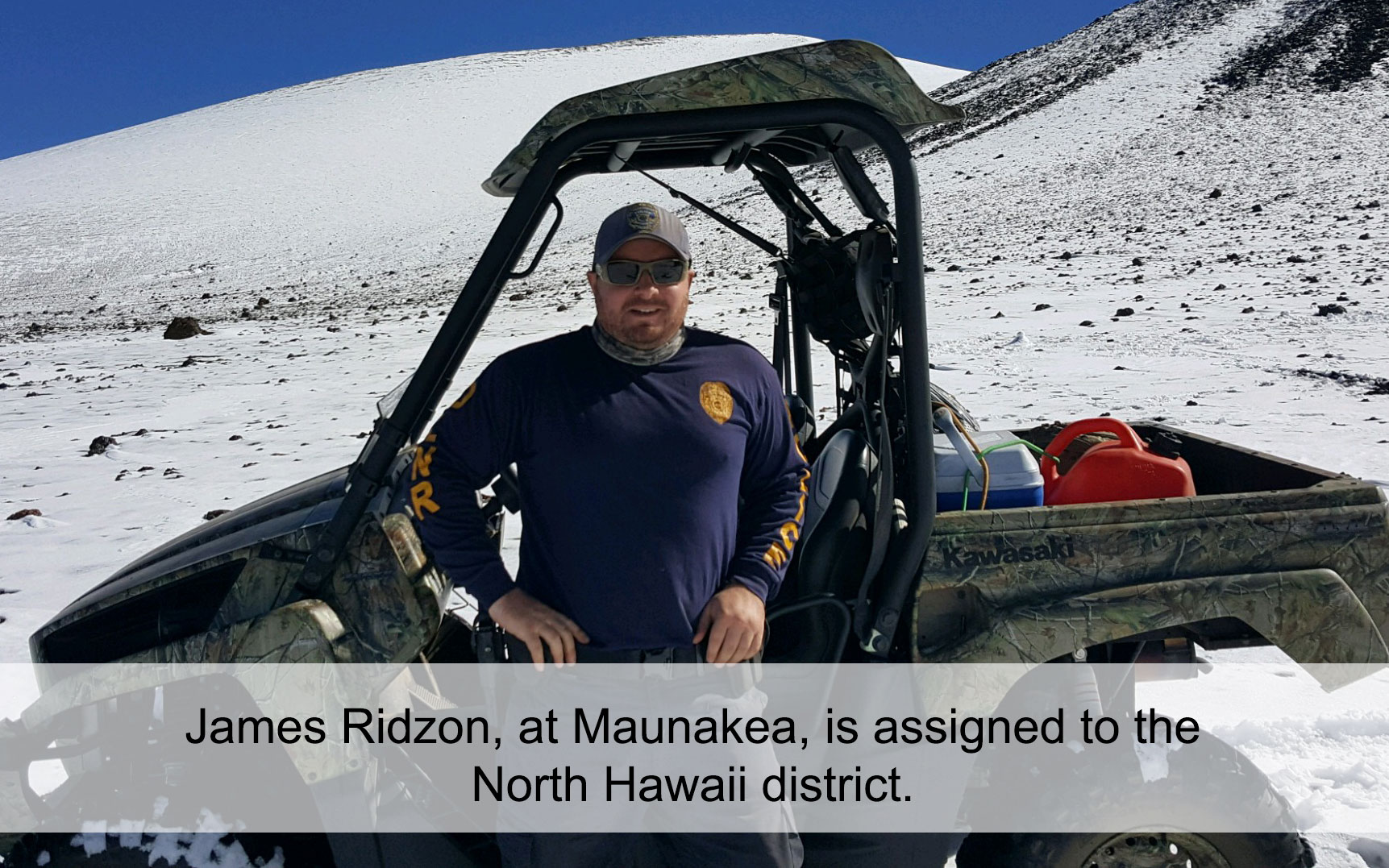 Unit 14 member James Ridzon never knows what his day will be like when he goes to work. And he wouldn’t want it any other way.

As a conservation and resources enforcement officer with the state Department of Land and Natural Resources (DLNR) on the Big Island, Ridzon could be responding to a hunting call in the mountains or doing shoreline checks in the ocean.

“We’re always doing something different,” says Ridzon, who is assigned to the North Hawaii district. “One day you can be doing bird hunting checks in the mountain and the next day we’re out on the boat, checking boaters or in the humpback whale sanctuary. Another day we can be on a trail hiking somewhere looking for a marijuana patch. There’s not really a typical day, which is why I like it.”

Part of DLNR’s Division of Conservation and Resources Enforcement (DOCARE), Hawaii’s conservation and resources enforcement officers, or game wardens, as they are commonly known, enforce all the rules and regulations under DLNR regarding hunting, fishing, boating, state parks and state lands in Hawaii as well as enforce the administrative rules. They have full police powers, too. Statewide there are more than 100 DOCARE officers and about 20 on the Big Island.

While Ridzon and his fellow conservation officers respond to calls or complaints, patrol areas and provide officer presence, they are proactive in their enforcement of regulations and in their protection of Hawaii’s land and natural resources. Like when hikers trespassed into Kohala Forest Reserve and the restricted Kohala watershed to access the “White Road” hiking trail, or when people are harassing turtles or fishing in enclosed areas. “In addition to protecting our natural resources, we’re here to keep people safe, promote safety and educate the public and community,” adds Ridzon.

In 2017 Ridzon received the first-ever DLNR/DOCARE Officer of the Year award for being “an effective investigator and strong protector of Hawai‘i’s natural and cultural resources.” “There are a lot of good officers in the division so it was an honor to be selected Officer of the Year,” he says modestly. “I was recommended by my supervisor and my branch chief. It felt nice.”

It’s a recognition well-deserved for someone who is doing a job he always wanted to do. Originally from Connecticut, Ridzon was previously in the Air Force and was finishing up college (he has a degree in biology) before he came to Hawaii nearly 10 years ago. He had always wanted to be a police officer so this job combines that ambition along with his love for the outdoors. Hawaii, particularly the Big Island, appealed to him. “It seemed like a great place to work, the weather, diversity of everything,” he says. “It’s cool. You can be up in the mountain where there’s snow today and then go down to the ocean.”

He also enjoys meeting different people while working. “I like talking to the public and visitors, educating them about the island and our natural resources. That’s fun for me,” says Ridzon. “Plus, I’m working outside in nature.”

Ridzon values his job and the people he works with. “I work with a bunch of good guys in my district,” he acknowledges. “I have the freedom to kind of do what I want when I go to work. I’m not being told what to do every single day. I like that. I have a good supervisor who lets me get out and do my job, which is nice. And I can always rely on the guys I work with to back me up.”

Overall Ridzon says his career as a conservation officer has been ideal. “It’s challenging but a unique, rewarding experience too.”