Deputy Sheriff: Social Distancing Is Not Always An Option 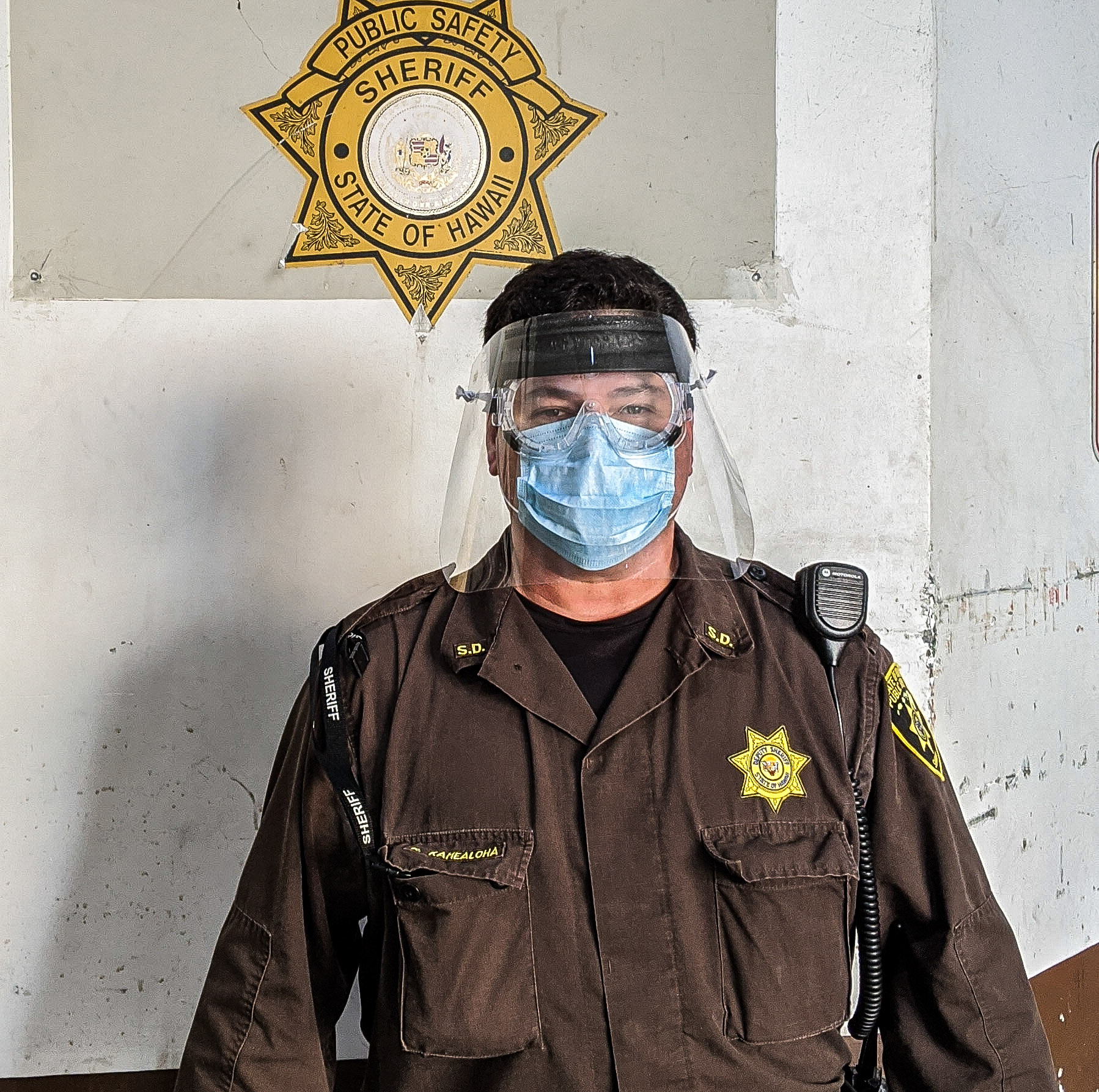 Even with public health recommendations to follow social distancing guidelines to help reduce the spread of the coronavirus, “unfortunately, there is no social distancing for us,” said Deputy Sheriff Ryan Kamealoha, with a chuckle. “For law enforcement, it isn’t always possible.”

He likens himself and his fellow deputy sheriffs to being in the same situation as health care workers and other first responders. “Our jobs demand close contact. People who have just been arrested come to us after being booked and fingerprinted, and now we are the next step in the criminal justice process,” said Kamealoha, a Honolulu district court cellblock deputy with the state Department of Public Safety. “It’s almost like being a health care worker where sick people come to them and there isn’t any other option but to be in close contact with patients in order to do their job. Other deputies, like those on patrol, must respond to any calls for service. You never know what you’re going to get into. There are many times that people can be violent, fighting, spitting, or showing a complete disregard for the current pandemic. The inherent dangers related to law enforcement is now magnified by the coronavirus.”

Individuals who are arrested by sheriffs or police and must go to court are brought to the Honolulu district court sheriffs. Inmates who come from the Oahu Community Correctional Center are screened, and if ill, are isolated and quarantined. But individuals brought in from the Honolulu Police Department or other law enforcement agencies, Kamealoha said, “are right off the street — and although HPD screens the individuals for COVID-19 by asking them questions and taking their temperature, there is no real way of knowing if the individual is positive or not, due to so many people being asymptomatic. Just because someone isn’t showing symptoms doesn’t mean they aren’t contagious.”

“Newly arrested people that come to us who are showing symptoms are taken to the hospital by the arresting agency to get a medical clearance before being allowed to be transferred to the sheriffs or another agency or go to court,” he added. “As long as they have medical clearance from the hospital, they are going to court. Due to the long incubation period without symptoms, we just have to assume that everyone is positive and treat them as such. We do everything we can to stay safe, including staying home when feeling ill. As much as we want to help our co-workers, it’s safer to stay home until better, so we don’t pass anything on.”

Although the sheriffs are now provided with masks, face shields and gloves, Kamealoha said that due to the shortages in the state and the country, once supplies run out there is no guarantee they will or can be replenished. Yet even with the personal protective equipment, it is difficult to practice social distancing and they still risk being exposed to the virus. “We need to be in close quarters with the custodies because we have to physically be in contact with them, patting them down for weapons, putting on and taking off handcuffs and leg shackles, escorting them to cells, and monitoring them in the courtroom,” he said.

Court proceedings for new arrests are mostly being conducted via teleconference, and the judges and prosecutors can hold court from another part of the building, or in another building entirely for their protection. “To avoid possible viral contamination to court staff, and to the rest of the people in the building, we modified our cellblock in order to facilitate the teleconference system. We want to limit social contact with other people as much as possible,” Kamealoha said.

With all the unique changes that the pandemic has forced upon everyone, Kamealoha and the 15 other sheriff deputies in his unit continue to persevere. The deputies are deemed essential workers by the state during this pandemic, but feel they are only doing their part to keep Hawaii safe. Currently, the deputies are faced with the challenge of splitting their functions handling custodies at HPD cellblock and OCCC custodies at district court.

Fortunately, there is a lower volume of custodies. Typically, on a high capacity day like Monday, they have as much as 130 HPD and OCCC custodies. The numbers have dropped considerably, rarely getting over 40 combined since pandemic precautions have been implemented. “The HPD, judges, prosecutors, OCCC, and the rest of the court staff have done an incredible job managing operations to decrease the custody numbers in order to reduce the risk of passing the virus,” Kamealoha said.

The court staff are helping by making a concerted effort to reschedule any trials or hearings to a later date. “They’re releasing as many as possible and postponing trials,” noted Kamealoha. “Anybody charged with a serious felony and isn’t released is sent to OCCC and has to come back to District Court for their preliminary hearing. If it’s a non-violent crime, they can be released to appear in court on another day. Sadly, however, many of those released end up getting re-arrested.”

Despite the high risk of getting infected, Kamealoha and the other Deputy Sheriffs continue going to work every day to do their job enforcing the laws and protecting the public. “We took an oath to protect, which includes doing our best to ensure the safety of the court staff, judges, prosecutors and public, and also the persons in our custody,” Kamealoha said. “We do this job because we love our state and want to protect it and its people, and in these uncertain times, it’s even more important that the public knows that we will be at work, doing our best as state law enforcement officers, with aloha.”

Back to News Archive